Jaguar from Clemons Boats Smooths Out the Ride

When the father-son team of Gregg and Grant Gallagher shook up the bass fishing world recently with a Great Lakes and Ontario record 10.15 pound smallmouth bass, most onlookers were too stunned by the fish to even question how it was caught. While the pair have since explained the details of their monstrous catch, they were also quick to stress that none of it could have been possible without the soft, smooth ride and reliability of their 2021 Bass Cat Jaguar.

Grant called the boat a “big water beast,” and said that his friends refer to it as “an aircraft carrier.”

“Lots of times when you’re fishing for smallmouths on the Great Lakes you can’t see any land around you,” he explained. “That’s a spooky feeling. But if you want to fish up here you have to learn to live with the giant waves to trust your gear and trust that boat.”

Many northern smallmouth anglers end up opting for a walleye or multispecies-style boat to provide for maximum comfort and safety, and Bass Cat-affiliated company Yar-Craft makes a viable choice in that market, but Grant said that the Jaguar has the “best of both worlds – that deeper hull for such a soft landing and dry ride, and also the top-end speed so that you can beat the next guy to the first spot in the morning.” The boat wasn’t just a critical element on the day of the catch itself, but also in the hundreds of hours of idling and scanning that allowed them to achieve this unprecedented catch. 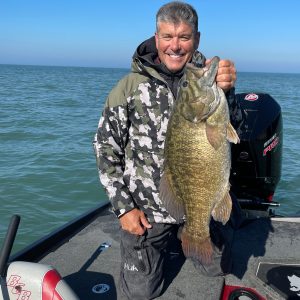 The smallie of a lifetime for Gregg Gallagher

“We like to think that we build boats that excel whether you’re skimming across a southern oxbow or making a long run on the Great Lakes,” said Bass Cat President Rick Pierce. “Clearly a place like Erie is a true testing ground for what a bass boat can withstand and our goal is to put out boats that give you confidence to do what it takes, whether you’re chasing records or trying to get a tournament win.”

The Gallaghers claim that they are “not an overnight success,” and merely set out to eclipse the 7 pound mark after topping out in the sixes. They purchased – paired with a Mercury 250 Pro XS – from Clemons Boats in Sandusky, Ohio, and raved about the relatively new Bass Cat dealer’s knowledge and service. They noted that during an NPFL tournament earlier this year the leader, who was not running one of their brands, broke down and “they stayed until after midnight to get him up and running. That’s a testament to the kind of people they are.”

While Clemons and the Gallaghers are on the US side of Erie, the fish came from the Ontario portion of the lake, and Bass Cat head of International Sales Kevin Short is proud that this boat is the choice of successful anglers on both sides of the border. “We’ve worked hard to establish ourselves as a leading choice on the Great Lakes, and everything from our livewell design to our soft-touch hulls are meant to keep you and your catch in tiptop shape.”

The Gallaghers recognize that they’re unlikely to top this amazing feat, but they’ll continue to work to get younger anglers involved in the sport, and will work with Clemons Boats to represent the Bass Cat brand proudly and responsibly.