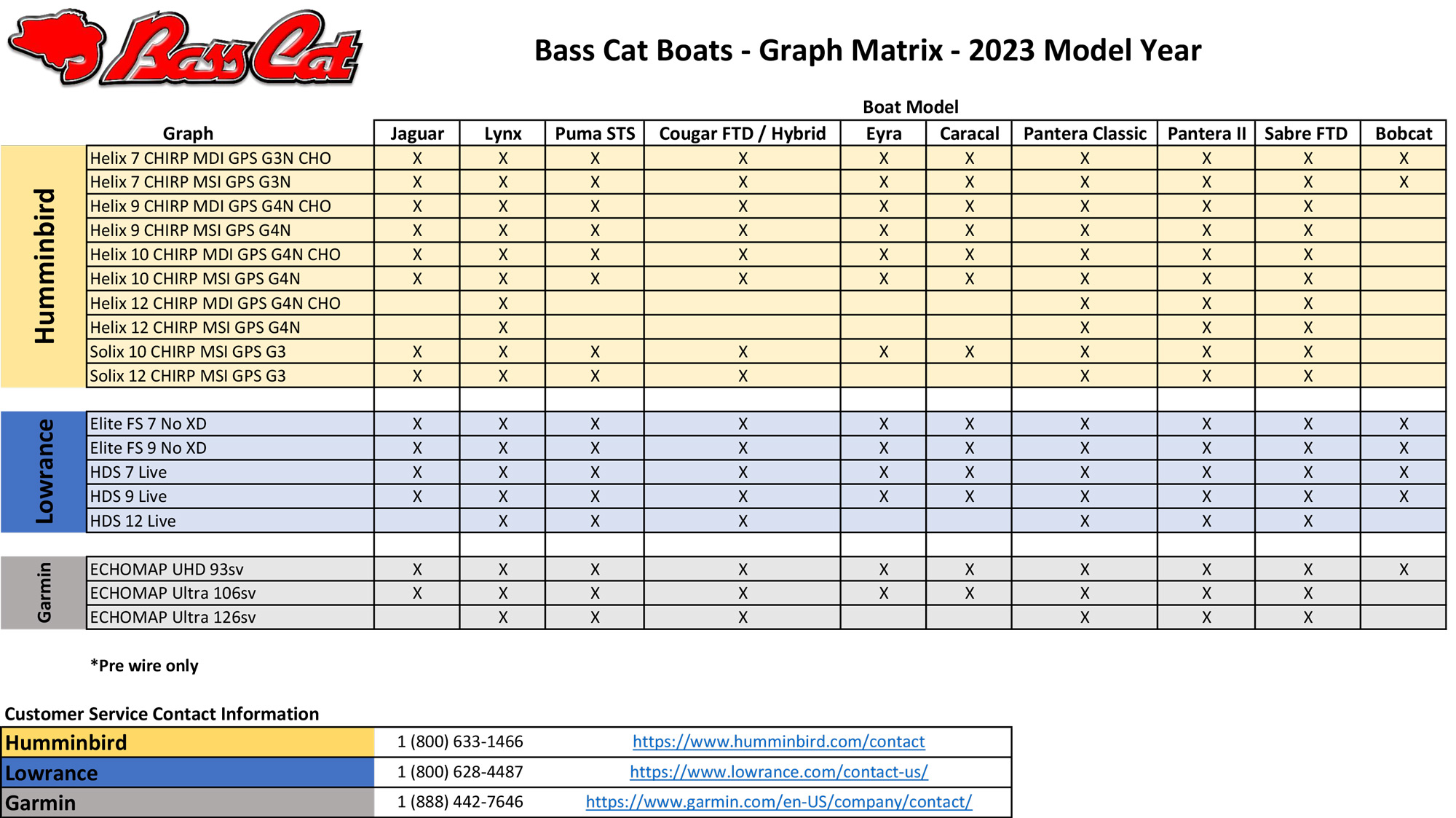 Our custom seats combine maximum comfort, durability, and customization to compliment every boat. Leather-feel vinyl with a special abrasion and UV resistant finish helps maintain fresh seats for many seasons. Darker colors offer CoolTouch™ technology to keep seats several degrees cooler than lighter colors using standard vinyl. Bass Cat is the only bass boat manufacturer to offer this material. Your boat model selection dictates the type of seat, with your choice of colors to match it perfectly.

NOTE: Advantage seats have an ‘A’ and ‘B’ insert option similar to the Premium seats. A & B must match, but if B is not selected, those sections will match the main seat color. 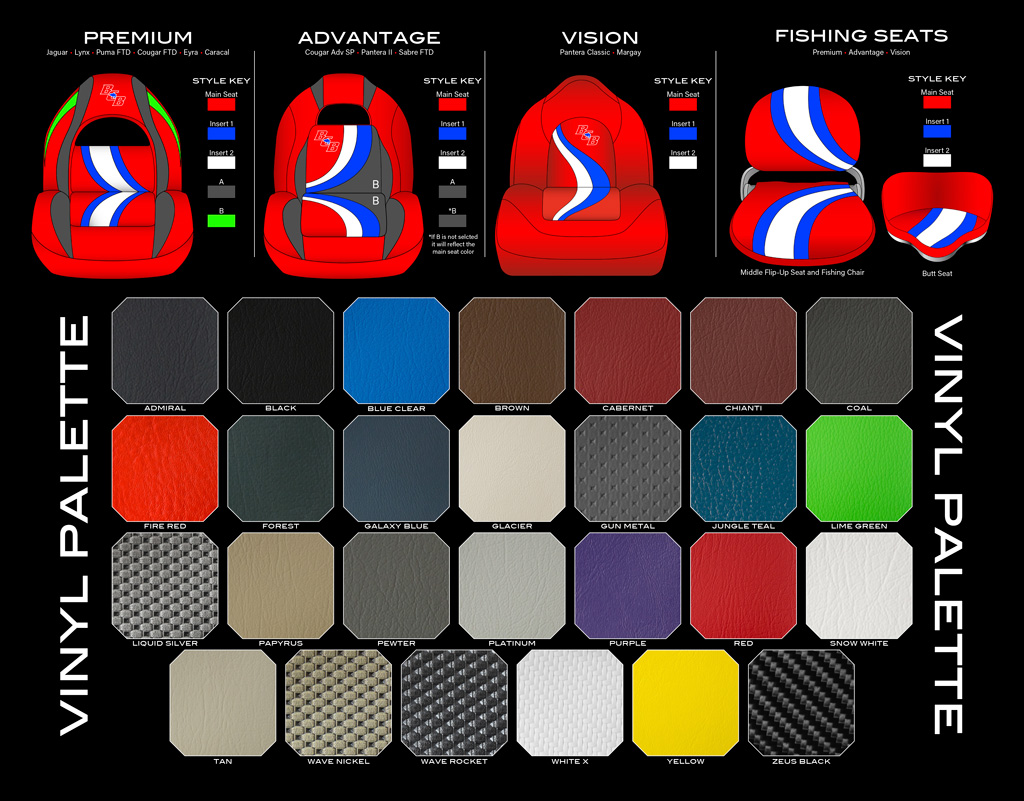 BCB Livewells operation is based upon an adequate mixture of all the necessities for your fish. Oxygen is only a part of that. Other factors are the Ph or alkaline levels, as well as the ammonia content. We all excrete ammonia, and your fish are no different.

The ammonia is broken up by the recirulator as it is heavy and falls to the bottom of the livewell. The recirc. should always be in use if you have one. If you do not, then you depend on the valve ratio which is a 60/40 mixture of fresh and recirculation.

The BP dashes (400, 2000, 100 and 101) all have prgrammable aeration and recirulation. The default is 12 minutes off and 1 minute on. This is only a default setting, and they should be set to about 2 minutes on and 8 minutes off for this time of the year. Default times are fine in the winter time and cool water. Though in spring, lets bump that up to the 8 or 9 minutes off and 1 mintue on.

As spring resides to summer, lets put the programmable timers on 7 minutes off and 3 minutes on for southern areas. Northern areas can be best served by the 8 minutes and 2 mintues on rule.

Directions on programming are in your dash manual and you probably need a short course on the functions of your dash if you don’t kjnow about hte programming. It does way more than you probably know about. Some have security systems and much more.

Too much aeration makes your fish a bit more hyper from our experience. So we try to mix those ratios based on our experience and data.

The aeration on a BCB works by the small injection sytem from those 5 or 6 1/8″ holes per side. These create micro bubbles that dissipate the ammonia when they inject into the upper layer of livewell water. We are actually creating some agitation of the water when the spray bar injects that upper layer.

The overflow may not keep up with the main aerator on all the time at manual. The overflow is about a 1″ outlet, though it is a drain at static pressure, and the head pressure is putting in more water than some systems use. So do not turn on the Fresh water in and the aeration together for long periods, you will overflow the welsl into your boat, storage and elsewhere.

The Fresh water in and pump out systems were initially for culling on those reservoirs where you have lots of small limits, and this eases that process. You can pump it down, tag your fish, and fill it quickly. If you need to redo the process later, you can reorganize those larger fish and smallest again by repeating that process. Gaining those critical ounces we all look for. And we already caught the fish, so let’s get the largest ones in the wells.

The secondary gain on these systems were the weigh in and ease of removing fish from the livewells. Though the realitiy is that it was created for the old Lake Guntersville BASS events and 60 fish a day on a trap in those tournaments on a 7 fish limit. It made culling a lot easier.

If your model does not have a flush valve, then you can depress the trash when it is dry and try to dislodge the debris, or you can add a flush valve if you desire.

Otherwise you can reverse flush the spray bar on those systems without a flush valve. Though remove all of the screens so that the trash can go out, for this. You can try air in the spray bars on those dry also. DON’T make the holes larger than they are. The holes are a part of the aeration process, which evacuate ammonia by aerating the water on top with recirculation. Those large holes on other boats give you flow, though they flowing ammonia back into those wells and the active oxygen subsides.

That about sums up a simple livewell use segment. We hope this helps and that all understand the livewells systems in their “Cats”.

Resins have been an ongoing development since the 2004 MACT regulation was applied by EPA. The first boats post MACT were AOC Hydropel low HAP (VOC) Vinyl Ester and that proved to not perform to our preference, compared to what was previously used. We tested most every variant of low HAP VE before MACT and settled on AOC as the best in our results at that time.

The previous VE resin was run from 1998 through 2003 and was an absolutely great pure vinyl ester across the board, used throughout on all products. Recession times set in with 911 and competition using much cheaper products post 2000 to 2004, or 2010, is all that prevents this today. Paying more than twice as much for resin and again bumping glass costs for AOC is not appealing to consumers price shopping. We have large dollars in better product and just two weeks ago a three time BCB owners was using price to navigate a Premium model for $3,000 less in another brand, while not shopping apples to apples. We understand the relationship to price, products and quality, though price alone is no comparative.

In 2007 resins were changed to an extremely tough VE Barrier coat behind the Gelcoat and the most widely used (#1) marine resin, at that time, in the marine business, this was another AOC product. The barrier coat was a mess to deal with while it aged our facilites and equipment prematurely, worked great though was just to difficult and could not be cleaned once cures were initiated. It proved too costly on maintenance.

In 2009 we stepped back into an AOC Iso blended hybrid that was supported with HK VE Barrier that proved out in testing.

Next in fall of 2012 we had AOC develop our own hybrid resin that was from our spec window with different ingredients and properties, bought then as an X-2013 Experimental until recently in 2015 they gave it another number. Our sister company Nautique is presently testing this resin for their application. To date it is a BCB specific product. This remains used in all parts and rear laminates, plus all Advantage and Vision models. It has worked better than any resin to this time frame since MACT. We do remain using the HK Vinyl Ester barrier coat in a 20 to 25 mil thickness behind the Gelcoat to protect from crazing and permeation.

In 2015 (2014 actual) model year we moved the Premium line to AME-6001 pure vinyl ester (VE) resins on the first laminates. This resin is not a hybrid and not available earlier. This then raised those resin cost by appx. 240% on some of these laminates all were over 215% more, more than double. Obviously we felt it is much better! The product became available after Ashland purchased the product line and the tech specs from DOW. Durakene was a solid VE resin that had to be promoted on site and was difficult to use, plus expensive.

Ashland was able to bring out newer AME-6001 and AME-6441 as a result of the research they bought from DOW, previously used in Durakene. And we never were AME-5000(1) or AME-4000(1) fans as they were not pure, thugh a hybrid of some VE blended, they failed every time in our testing and felt they were more hype than guts.

We remain using the same HK Barrier coat in all applications.

Thats more than you knew and More than any other company will dare share. We will always continue to develop the bets laminate structure and shoot for above 38% Fiberglass content. Presently we have recently tested weight sampling on 8 different boat models with our summer intern (Kyle – UofA), his results display between 40.% and 43.1% fiberglass content by weight with the rest being resin. An extremely high ratio for open laminates. We don’t believe most production shops operate with this efficiency. Actually none we know of run this high of a glass ratio.

There you have it answered and future developing questions answered as well.

There is no manual for the panel, there really is nothing to work on or set. The only breaker is in the rear on the main line from the battery.

The valve should allow water to flow through if the livewells have water in them and the valve is turned in line with the elbow and not cross ways. There are two (2) flush valves to remove trash on those holes in the injection system. We have played intensely with the holes in the spray bars, they are maxxed out with the pumps we are using now for flow and injection pressure to remove ammonia.

Bilge:
Auto on with or without Master Power
Manual on with Master

Navigation lights are controlled at both helm and bow

Fuel switches only the gauge from right to left, which is Left for Main and Right for Kicker tanks (2 x 10 = 20 gallons)

The small round A-Ten Touch pad on Premium models has:
Pump In
Pump Out
Fish button for Livewell Lights or black lights.
Security for Alarm system

The small round Touch Pad on Vision models and some Advantage:

Aeration with timer connected to valve or direct

PLUS ~ There is a hidden button in the exact center of the touch pad which has operation there for any function you decide. You can not see or feel this button, though it is there.